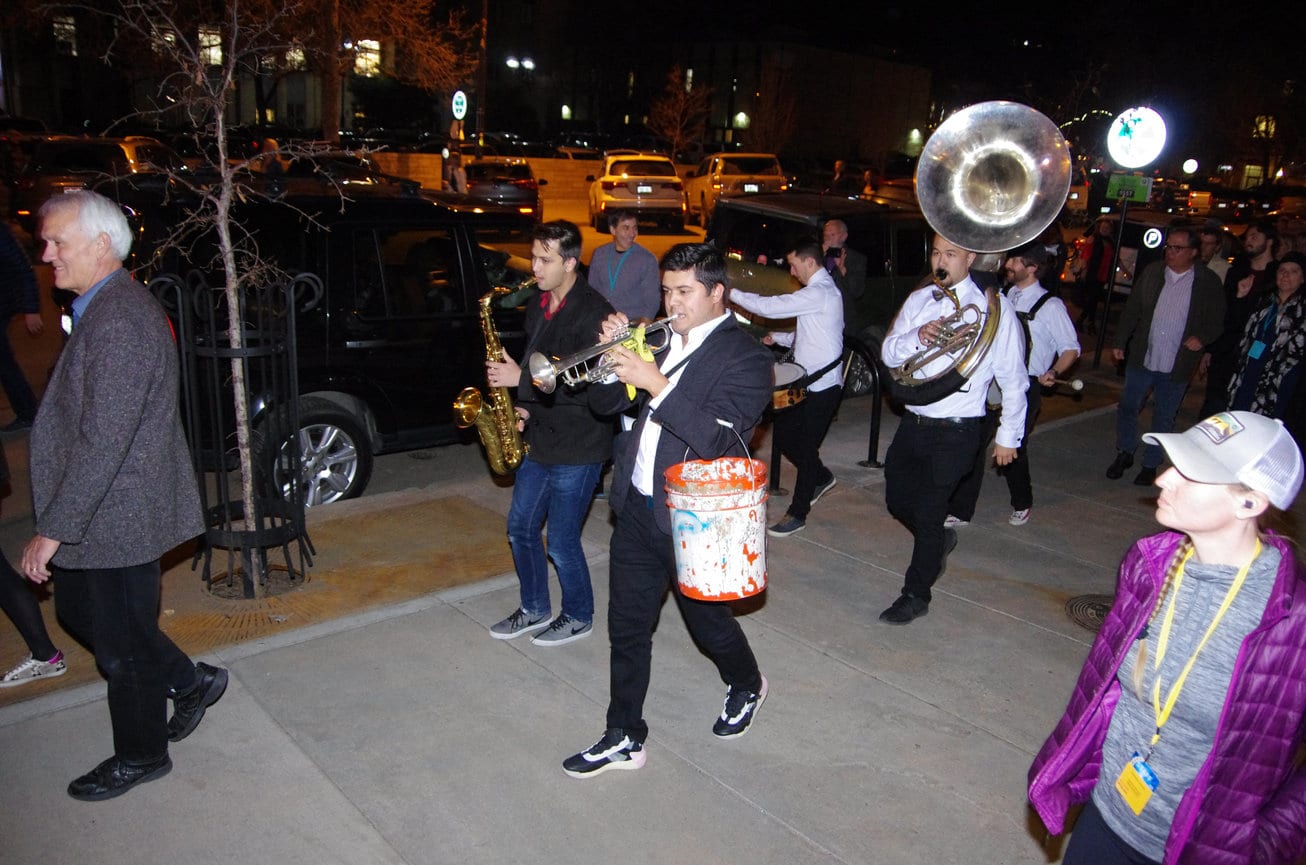 BOULDER,
COLO – (February 7, 2019)
The 15th Annual Boulder International Film Festival (BIFF) is pleased to
announce its full program of 55 films, including six films straight from this
year’s Sundance Film Festival, and six music documentaries, two of which will
be the feature films on Opening and Closing nights. This year, BIFF features
the following celebrity appearances: music legend David Crosby will be
in-person on Opening Night to talk about his hot new documentary, David Crosby: Remember My Name; Golden
Globe-nominated actor, writer, director and producer Emilio Estevez will
participate in a Q&A after the screening of his film, The Public; and Grammy Award-winning singer-songwriter Jakob Dylan
will be in the house on Closing Night to talk about the critically acclaimed music
film, Echo In The Canyon.

New in 2019, BIFF is taking a selection of its award-winning
line up to Fort Collins after BIFF on March 8 & 9, and will highlight many
films from the Festival. “We’re very excited to announce our partnership with
the Fort Collins community and the Lincoln Center,” said Kathy Beeck, BIFF
Director. “The 1,180-seat Performance Hall at the Lincoln Center is one of the
most beautiful, state-of-the-art venues in Colorado and provides the perfect
setting.”  Tickets for BIFF 2019 Fort
Collins can be purchased at biff1.com/foco.

BIFF is one of the first film festivals to have an augmented
reality-enabled printed program, created by Pat Mallek of Boulder’s Mighty
Fudge Studios and Larry Miller from Edutainment Systems. Download the BIFF app,
hold your smartphone over a film image in the program, and the film’s trailer
comes to life.

The Festival kicks
off on Thursday, February 28 at 5:00 pm with an Opening Night Red Carpet Gala
at the Hotel Boulderado and Rembrandt Yard, followed by the Colorado premiere
screening of David Crosby: Remember My
Name. Produced by award-winning director Cameron Crowe and coming to BIFF
straight from Sundance, this documentary provides a revealing and deeply
personal look into the life and creative renaissance of music icon David
Crosby. Also in attendance will be the film’s director A.J. Eaton and executive
producer Jill Mazursky. Film starts at the Boulder Theater at 7:30pm. Tickets
are $95 and available at biff1.com

Golden
Globe-nominated actor and director Emilio Estevez will make a special
appearance at the screening of his new film, The Public, at BIFF’s Red Carpet Event on Saturday, March 2, at the
Boulder Theater. Emilio Estevez will be presented
the Festival’s prestigious Vanguard Award. In addition, Mr. Estevez will
participate in a Q&A with Ron Bostwick following the screening. The Public is an insightful and
uplifting film that tackles some of our nation’s most challenging issues, and
sets the dramedy inside one of the last bastions of democracy-in-action: the
public library. Tickets are $35 at biff1.com.

The Festival weekend concludes with a screening and
in-person appearance of Grammy Award-winning singer-songwriter Jakob Dylan who
will talk about his acclaimed rock n’ roll tribute film Echo In The Canyon. This special screening, directed by
music-industry veteran Andrew Slater, features the sounds of LA’s famous Laurel
Canyon music scene in the ‘60s—including music from The Byrds, The Beach Boys,
Buffalo Springfield, The Mamas & The Papas and more. Mr. Dylan will
participate in a Q&A after the film with Ron
Bostwick, Director/Producer Andrew Slater, and Producer Eric Barrett. Live
music by Card Catalogue. Tickets are $35 at biff1.com.

A young urban
couple gets booted from their LA apartment and buys a run-down 200-acre farm
that will not even grow weeds. They consult a Zen-farming expert who suggests a
fantasy-utopian farm. When the farm’s ecosystem finally begins to reawaken, so
does the couple’s hope. As their plan to create perfect harmony takes a series
of wild turns, they realize that to survive they must reach a far greater
understanding of the wisdom of nature, and of life itself. Directed by John
Chester

New York cousins
Vincent (Jesse Eisenberg) and Anton (Alexander Skarsgard) are players in the
high-stakes game of high-frequency trading. Vincent the hustler and Anton the
brains push each other and everyone around them in their quest to attain the
ultimate American Dream, and clash with their rapacious former boss, Eva Torres
(Salma Hayek). Racing against time, the cousins move mountains to get rich
faster, only to find redemption and renewal at the end of the line. Directed by Kim Nguyen

Direct
to BIFF from Sundance 2019

Roman (Matthias
Schoenaerts), a convict in a prison in rural Nevada, participates in a
rehabilitation program in which he trains wild mustangs. He struggles to
connect with the horses and his fellow inmates alike. But in time, working
alongside young convict Henry (Jason Mitchell) and an old trainer, Myles (Bruce
Dern), Roman soothes an especially feisty horse and confronts his own violent
past.

You Are Here: A Come From Away Story

The big heart of
the little town of Gander, Newfoundland was revealed when 38 airliners carrying
7,000 passengers were forced to land at their airport after the 9/11 terrorist
attacks. Although the Ganderites struggled with dozens of new languages, they
were ingenious in solving huge logistical problems.  Among other things,
the film pulls back the emotional layers surrounding the five days that the
community housed, fed and took care of the dislocated passengers – the
“come-from-aways” in Newfoundland parlance.

CineCHEF is a BIFF
signature event that challenges nationally-recognized chefs on the Front Range
to create film-inspired dishes based on a movie theme. New this year, BIFF will
feature an all women lineup of culinary stars competing for the coveted Festival
foodie prize.  May
the best chef…and city…win! For more details, go to biff1.com/cinechef

A CineCHEF ticket includes
the film Chef Flynn, directlyfollowing THE
CineCHEF event at 7:30pm, March 1 at the First Presbyterian Church.  (Show
CineCHEF ticket stub or mobile ticket for entry.)  Ten-year-old Flynn McGarry
transforms his living room into a supper club, and by 16 years old, he has
staged in top restaurants in Los Angeles, New York, and Europe. Director
Cameron Yates creates a collage of Flynn’s singular one-of-a-kind
childhood, and the result is a fascinating portrait of a young star’s rise as
seen from the inside.

Beyond food, film
and fun, the Festival is proud to unveil its groundbreaking XR Pavilion, Youth
Pavilion, Singer-Songwriter Showcase and Talkback Tent. These venues are FREE
and open to the public throughout the weekend’s festivities.

Full
Festival Program: The full festival program is
available online all and all festival tickets and passes will be on sale
Friday, February 8 at www.biff1.com.

About
the Boulder International Film Festival The
Boulder International Film Festival (BIFF) brings films and filmmakers from
around the world to Boulder, Colorado for a four-day celebration of the art of
cinema. BIFF attracts more than 25,000 film enthusiasts, media and industry
members annually and takes place February 28-March 3, 2019. For tickets and
more information go to biff1.com.
Follow BIFF on Facebook, Twitter, and Instagram.