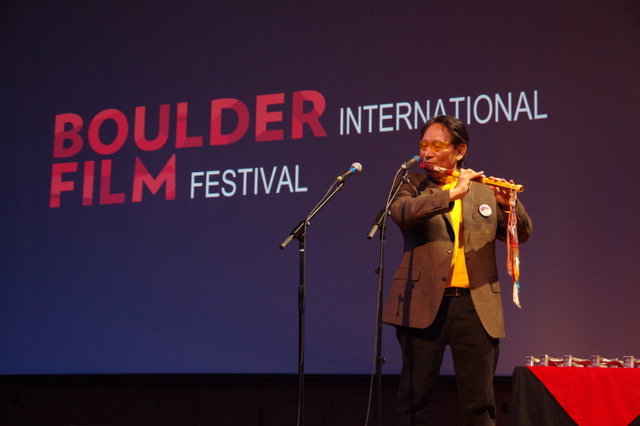 In Academy Award winning Director Louie Psihoyos’ new film Mission: Joy, Finding Happiness in Troubled Times, the movie stars of the hour, the blockbuster celebrities tasked with helping to elucidate and illuminate a unique and altogether poignant answer to that most difficult of questions, are none other than two of the most powerful, insightful, and compassionate men in our collective world history: Archbishop Desmond Tutu and His Holiness the Dalai Lama. It must also be said, before we get any further, that these two men, these two lifelong friends, are also two of the funniest, wittiest, and most charming as well; if ever there was an essential building block to uncovering the source of joy, and therefore the definition, it would be laughter — and boy do these two love to laugh.

Psihoyos’ film is deceptively simple. When taken at face value, the film is an interview, a conversation amongst four people: two friends and “mischief makers,” a scholar and interpreter, and an author and interviewer. But, when analysed further, when looked at from afar, what becomes startlingly clear is that this film is a breathtaking anthology — not only of the two men’s lives as individuals and icons but of their nations’ and peoples’ struggles for freedom amidst suffocating political and social violence, persecution, and erasure — a weaving of found footage from the 50s, 60s, 70s, 80s, 90s, 00s, 10s, with new footage from the 20s — the now — and a barrier-breaking and intimately moving portrait painted through impeccably-done documentary filmmaking.

It’s no surprise, then, that reactions and emotions ran the gamut at our BIFF showing this chilly, starry-skied, bittersweet, closing Sunday night. The main reaction? Shocker, it was laughter. And the main emotion? It just might have been joy.

After the screening, BIFF favorite (interviewer) Ron Bostwick chatted with Psihoyos about his filmmaking journey, his relationship with this film, his introductions to the remarkable story, his own understanding of joy, and his connections to Boulder and its arts community; in a sense, it was kismet. After reading and loving The Book of Joy: Lasting Happiness in a Changing World, the bestseller upon which the documentary was “based,” Psihoyos found himself at a dinner party with the novel’s author Douglas Abrams — who just so happens to be the film’s interviewer as well — and found himself also, lo and behold after their chatting at the table, the lucky filmmaking soul given the greenlight from Abrams for the documentary of anyone’s wildest cinematic dreams.

And so it all began, and so Psihoyos came to be standing there, on our BIFF stage, speaking about how joy operates in his life — “make the most of this f-ing life!” — and, even, giving us Boulderites and Boulder visitors a bit of joy in his gracious words of thanks to the Boulder community for the hands and hearts lent on his winding, past path to filmmaking discovery. Another discovery that shocked the audience? The fact that a film can change the way you think in only 90 minutes. Did you think the saying, which Psihoyos quoted, “that movie changed my life” was just that, a saying? Well, Psihoyos says think again. Still in doubt? Mission: Joy is waiting.

Yes, it only takes 90 minutes. So, then — what film will you watch tomorrow?

Want to learn more and get involved? Head to the link below to sign up for some joy