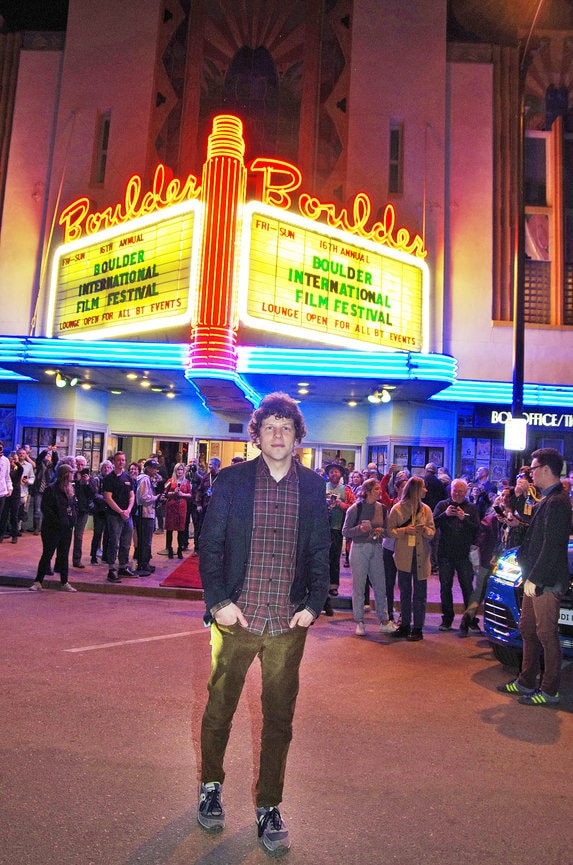 BOULDER, Colo. (February 12, 2020) – The Boulder International Film Festival (BIFF) is pleased to announce two special programming highlights that will interest film buffs everywhere. BIFF is proud to announce a red-carpet celebrity appearance by Academy Award-Nominated actor Jesse Eisenberg on Saturday, March 7 for the Colorado premiere of the film Resistance at the Boulder Theater. Eisenberg stars in this compelling drama based on the true story of Marcel Marceau and a group of unsung heroes who put themselves in harm’s way to rise above hatred and oppression during World War II. “We’re thrilled to screen this incredible filmand to share the news of actor Jesse Eisenberg’s special red-carpet appearance at this year’s Festival,” said Robin Beeck, BIFF’s Executive Director.

The action continues through Closing Night on Sunday, March 8, with a special appearance by award-winning director and Boulder’s own Jeff Orlowski for the Colorado premiere of the stunning new film The Social Dilemma, direct to BIFF from its premiere at the Sundance Film Festival. Through a unique combination of documentary investigation and narrative drama, Jeff Orlowski disrupts the disrupters by unveiling that search engines, networks, instant information, and the like are merely tools to manipulate us and lure us in. The Social Dilemma features remarkable interviews with high-profile tech whistleblowers, including Tristan Harris of the Center for Humane Technology, the co-inventor of the Facebook “Like” button, Justin Rosenstein; and Tim Kendall, former president of Pinterest and former director of monetization at Facebook.

Q & A after the film screening by Ron Bostwick, featuring Jesse Eisenberg

Tickets are $35 (plus service charge)/ FREE for Passholders

Tickets on sale now at biff1.com.

Before he was the world-famous mime Marcel Marceau, he was Marcel Mangel, an aspiring Jewish actor who joined the French Resistance to save the lives of thousands of children orphaned at the hands of Nazis. Jesse Eisenberg stars in this compelling drama about a group of unsung heroes who put themselves in harm’s way to rise above hatred and oppression during World War II. His life is thrown into upheaval when he is recruited into the French Resistance, putting his acting skills to the ultimate test in teaching orphaned Jewish children how to survive in the horrifying reality of the Holocaust. Based on the inspiring true story, Resistance follows the revolutionary tale of a selfless act that would forever change countless lives.

Jesse Eisenberg is an Academy Award-nominated actor and an acclaimed playwright and author. Eisenberg’s film credits include Roger Dodger, The Squid and the Whale, Adventureland, Zombieland, The Social Network, Now You See Me, The Double, Night Moves, The End of Tour, American Ultra, Louder Than Bombs, Batman v. Superman, Now You See Me 2, Café Society and Justice League, The Hummingbird Project, The Art of Self Defense and Zombieland: Double Tap. Eisenberg has written four plays, including  “Happy Talk,” starring Susan Sarandon and Marin Ireland, which opened this April at the Signature Theater in New York. Born in New York, Eisenberg is a frequent contributor to The New Yorker.

7:30 pm: Screening of The Social Dilemma

Tickets are $35 (plus service charge)/ FREE for Passholders

About THE SOCIAL DILEMMA

A powerful exploration of the extreme impact that a relatively small number of engineers in Silicon Valley have over modern-day society, The Social Dilemma deftly tackles concepts like technology addiction, social engineering, and surveillance capitalism. It makes them visceral, understandable, and urgent. Through a unique combination of documentary investigation and entertaining narrative drama, award-winning filmmaker and Boulder’s own Jeff Orlowski disrupts the disrupters by unveiling that search engines, networks, instant information, and the like are merely tools to lure us in.

Once we’re hooked, the real commodity they sell is their ability to influence and manipulate us. The film features stunning interviews with high-profile tech whistleblowers, including Tristan Harris of the Center for Humane Technology, the co-inventor of the Facebook “Like” button, Justin Rosenstein; and Tim Kendall, former president of Pinterest and former director of monetization at Facebook. These are coupled with compelling narrative segments—including a cunning performance by Vincent Kartheiser (“Mad Men”) — that illuminate the real-world consequences these seemingly innocent technologies can have on our everyday lives.

Enjoy a tasty brew of bohemian swing—an intoxicating, toe-tapping mash of gypsy, twang, gospel, and soul from Half Pint & The Growlers, followed by the BIFF Awards Ceremony where we’ll honor the best of the fest with their handcrafted Vielehr award sculptures.

“Best of the Fest” GRAND JURY PRIZES include:

For more information on the full line-up and other celebrity appearances, visit biff1.com. All tickets on sale February 14.

About the Boulder International Film Festival The Boulder International Film Festival (BIFF) brings films and filmmakers from around the world to Boulder, Colorado, for a four-day celebration of the art of cinema. BIFF attracts more than 25,000 film enthusiasts, media, and industry members annually and takes place from March 5 – March 8, 2020. For tickets and more information, go to biff1.com. Follow BIFF on Facebook, Twitter, and Instagram.

May the Best Chef - and Gender - Win