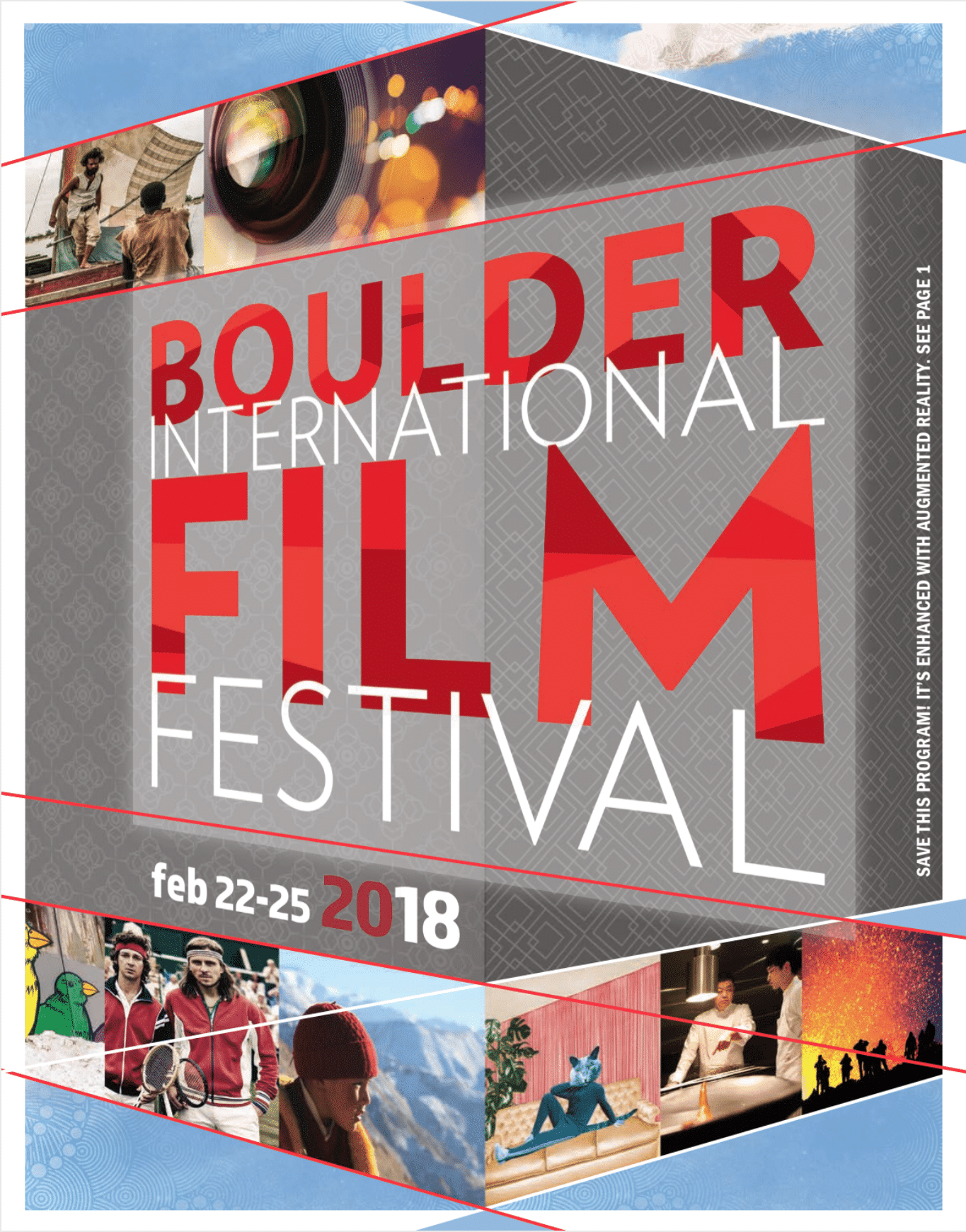 BOULDER, Colo – (February 1, 2018) The 14th Annual Boulder International Film Festival (BIFF) is pleased to announce its full program of 72 films, including seven films straight from this year’s Sundance Film Festival, and seven films recently nominated for an Academy Award. This year, BIFF welcomes Oscar-nominated actor Elliott Gould who will be in Boulder for a Q & A after a screening of his hit new film Humor Me, which was Executive Produced by Boulder-based Superlative Films. Academy Award winning filmmakers and BIFF alumni Louie Psihoyos and Morgan Neville are among the list of filmmakers, directors and producers who will be screening their latest projects in Boulder.

BIFF be will one of the first film festivals in the world to have an augmented reality enabled printed program, created by Pat Mallek of Boulder’s Mighty Fudge Studios and Larry Miller from Edutainment Systems. Simply download the BIFF app, hold your smartphone over a film image in the program, and you’ll see the film’s trailer come to life. Save the BIFF program book, it’s nothing less than a technological milestone!

“We are so excited for this year’s stellar lineup of films, as well as our new BIFF app and Augmented Reality printed program, said Robin Beeck, BIFF Executive Director. “We encourage everyone in Colorado and surrounding areas to visit Boulder – book a room, buy a festival pass and have a total film, technology and food immersion vacation.”

Full Festival Program: The full festival program is available online and all festival tickets and passes will be on sale on Friday, February 2, 2018: www.biff1.com

The festival kicks off on Thursday, February 22nd at 5:30 p.m. with an Opening Night Red Carpet Gala and Colorado Premiere screening of BORG VS MCENROE. This Opening Night feature film tells the true story of the epic rivalry between Swedish tennis legend Bjorn Borg and brash American John McEnroe during the 1980 Wimbledon Championships. The film stars Shia LaBeouf and Sverrir Gudnason. Tickets are $60 at www.biff1.com.

The Film Festival weekend ends with a work in progress screening of the new, Untitled James Balog Documentary, featuring stunning images from globally-acclaimed, Boulder-based photographer James Balog. For 35 years, Balog (CHASING ICE) has broken new conceptual and artistic ground on one of the most important issues of our era: human modification of our planet’s natural systems. Balog innovatively combines art and science in this documentary that reveals how environmental problems are affecting the lives of average Americans. Tickets: $20/person www.biff1.com

Directed by Louie Psihoyos (Racing Extinction, The Cove) and executive produced by James Cameron, The Game Changers tells the story of James Wilks—elite special forces trainer and winner of The Ultimate Fighter—as he travels the world on a quest for the truth behind the world’s most dangerous myth: that meat is necessary for protein, strength and optimal health. Meeting elite athletes, special ops soldiers, visionary scientists, cultural icons and everyday heroes, Wilks’ discoveries permanently change his relationship with food and his definition of real strength.

The House of Tomorrow, Produced by Boulder-based Superlative Films

Sixteen-year-old Sebastian Prendergast has spent most of his life with his Nana in their geodesic dome home tourist attraction where she raises him on the futurist teachings of her former mentor, Buckminster Fuller, in hopes that one day Sebastian will carry Fuller’s torch and make the world a better place. But when a stroke sidelines Nana, Sebastian begins a friendship with Jared, a chain-smoking, punk-obsessed 16-year-old with a heart transplant who lives in the suburbs. Sebastian and Jared form a band and must decide if he wants to become the next Buckminster Fuller, the next Sid Vicious or something else entirely. The film stars Ellen Burstyn (Interstellar), Nick Offerman (Fargo), Asa Butterfield (Miss

The Devil We Know

In 1945, DuPont introduced Teflon to the marketplace and changed millions of American households. Today, a bio-persistent chemical used in the creation of those products is in the bloodstream of 99 percent of all Americans. A compelling and ultimately terrifying watch that will make you question everything in your kitchen, The Devil We Know lays out the history of DuPont’s use of the chemical C8, examines C8’s environmental and health impact (and the company’s awareness of that impact), and celebrates the

everyday whistleblowers and fact finders who helped bring this crisis to the public’s attention. Directed by Stephanie Soechtig

Won’t You Be My Neighbor?

Academy Award-winning filmmaker and BIFF Alumni Morgan Neville’s (Troubadours, Music for Strangers) latest documentary takes an intimate look at America’s favorite neighbor: Mister Fred Rogers. A portrait of a man whom we all think we know, this documentary is an emotional and moving film that takes you beyond zip-up cardigans and the land of make believe, and into the heart of a creative genius who inspired generations of children with compassion and limitless imagination. Focus Features.

CineCHEF is a BIFF signature event that challenges nationally-recognized chefs on the Front Range to create film-inspired dishes based on a movie theme. New this year, BIFF is adding a Boulder vs. Denver twist to the culinary competition, showcasing four chefs from Boulder and four chefs from Denver. May the best chef…and the best city win! More details and full chef line-up at biff1.com/CineCHEF.

Festival Passes can be purchased on-line at: www.biff1.com